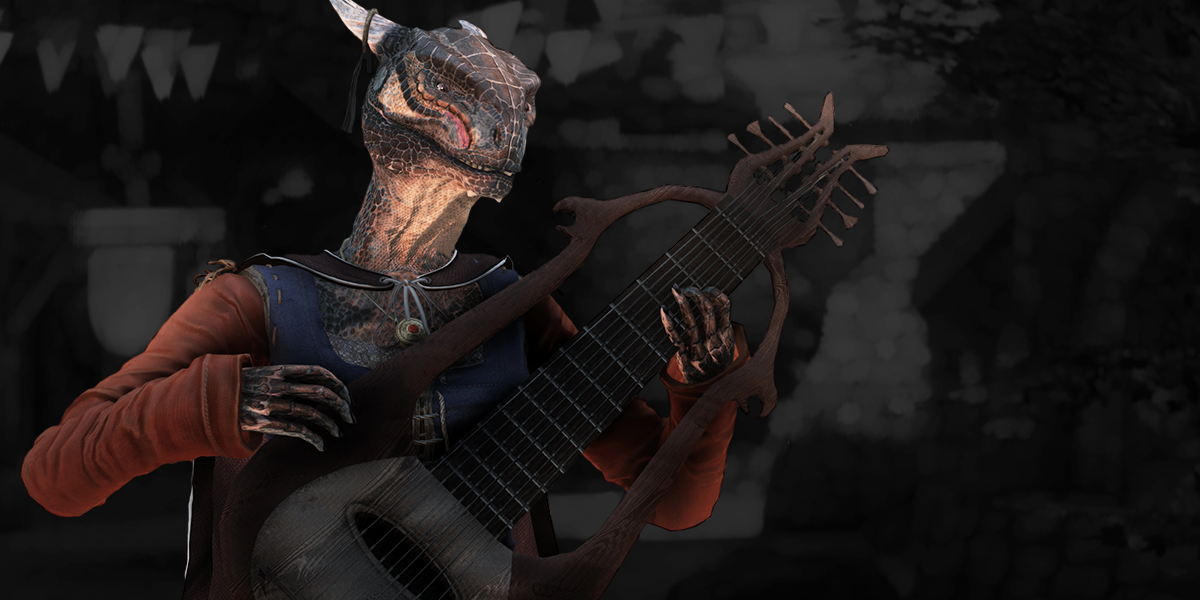 Sings never knew her birth family. She was brought to Cyrodiil as an infant, to be adopted by one of its influential families. Given the best education money could buy, she grew up to become a prominent member of the community, the sparkling jewel of Imperial high society. An excellent orator and a gifted singer, she could often be found providing entertainment at her parents' frequent soirées. The rest of the time, Sings frequented the Minstral's Guild located in the Plaza District. Part band, part theater troupe, the Guild was a melting pot of races, classes, and personalities, whose members could often be found carousing in the Waterfront's many dive bars until the early hours. Many of its younger and more affluent members attended in secret, fearing censure from their families or - worse - their upper-class peers. However, Sings remained open about her association, and became an outspoken proponent of the plight of Cyrodiil's lower classes - something her doting parents were affectionately indulgent of.

Touring the city with the Guild exposed Sings to the reality of life for many of Tamriel's less fortunate races, and she began to consider whether her birth parents had been similarly afflicted by the poverty that was common to argonians outside Black Marsh. Despite this, she had precious little information to go on: all Sings' family knew was that she had arrived with a refugee caravan from the north, and that the Dunmer man they adopted her from claimed she had been orphaned by some kind of war. By now determined to uncover the circumstances of her birth, Sings bought passage with a group of nords returning to their native Skyrim. It was only after they were arrested at the border that she realized she had been travelling with a group of Stormcloak rebels, intent on returning home to join the civil war. Thankfully, some the guards recognized Sings as an Imperial citizen before she could be tried for her crimes. They escorted her the rest of the way north, to the Imperial satellite city of Solitude.

Having joined Solitude's tiny Bard's Guild, Sings became a regular sight on the city streets, playing for crowds of nords who could scarce believe that an argonian was capable of such melodious singing. She was frequently invited to sing at the Jarl's court, as well as entertain soldiers in the Legion barracks. It was during this time that Sings managed to find a lead on her birth parents: an argonian woman hauling packages for the East Empire Company made mention of a fire in Windhelm which had left several argonian dockworkers dead. The current headquarters of the Stormcloak rebellion, Windhelm was off-limits to any Imperial citizen with an ounce of sense. However, Sings managed to beg, bargain, and wheedle her way onto a detachment of soldiers making their way from Solitude to the Legion encampment in Eastmarch. Once there, she began looking for somebody to escort her the rest of the way, eventually finding a reliable guide in a capable - yet mysterious - local mercenary, Saxhleel.

Growing up in Cyrodiil, Sings was largely inured from the harsh realities of life for many argonians in Tamriel. As a result, she is very sweet - some might say, almost naive - in her approach. Ebullient and luminous, Sings has a way of shining regardless of the setting. This, coupled with her open-hearted manner and easy, artless charm, tends to draw people into her orbit as if enchanted. A talented performer, Sings is naturally outgoing in front of a crowd, but has a habit of being inattentive to her surroundings when she's in the "zone". Intelligent yet fundamentally unworldly, she is passionately outspoken about her beliefs, regardless of how starry-eyed they may be. Her friends describe her as a dreamer and an idealist, a confident woman who thrived in Cyrodiil's small-town environs. Beyond that, however, her lack of experience makes her vulnerable to manipulation.